Today’s guide will cover how to start gearing up for Torment I depending on your class. This batch of tips offer advice for all the playable classes on your Diablo 3 account, how to play them on higher Torment levels, which legendaries or set items are the best for them and why. The end goal is to create a character on which all the items match perfectly with the chosen skills and the entire character feels like a puzzle, pieced together. 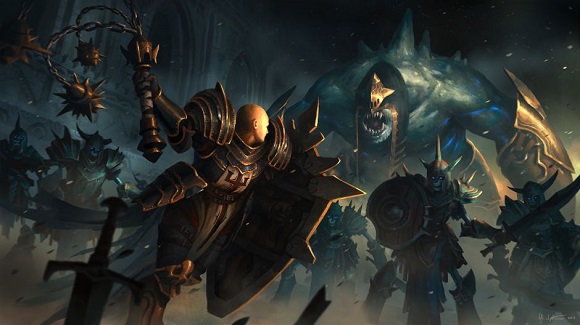 Their best set: The good old Immortal King’s set is still in business. Its bonuses to the Wrath of the Berserker and Call of the Ancients skills are just unmatched.

Fan favorite build: Top barbarians like to mix up a bunch of items from different sets. The above mentioned Immortal King’s set AND Raekor’s set and its additional bonuses to Furious Charge are quite powerful together.

Great Kanai’s Cube powers: That’s a lot of sets, so The Ring of Royal Grandeur is a must. It reduces the number of items needed for set bonuses by one, so it’s always a good choice if we’re using a lot of set items. The Vile Ward and the Standoff’s legendary affixes boost our Furious Charge skill further, so those should be our other choices. The Furnace is a good alternative (it’s actually a good alternative for all classes, but its drop rate is the worst) as well: elite packs will die in no time to that weapon.

Their best set: Instead of a 6-set bonus, top crusaders are only using the combined powers of The Wailing Host and the Litany of the Undaunted set rings. With these, every ancient legendary item equipped will increase the damage dealt by 100%. That sounds terrifying, and it really is!

Fan favorite build: The bonuses of this 2-piece set mean that the top crusaders’ favorite builds will include as many ancient legendaries as possible, focusing everything on resource regeneration, cooldown reduction and increasing the strength of one particular skill. Most of the time it’s the one called Bombardment. Ancient legendaries are hard to get, but almost all the top players are using this class in Season 5 and since patch 2.4. Right now they’re the most powerful ones.

Great Kanai’s Cube powers: Depends on the build. In-geom is a great choice all the time because of its powerful cooldown reduction bonus, but the weapon called Mortal Drama fits really well into a build that focuses on Bombardment for D3 account holders.